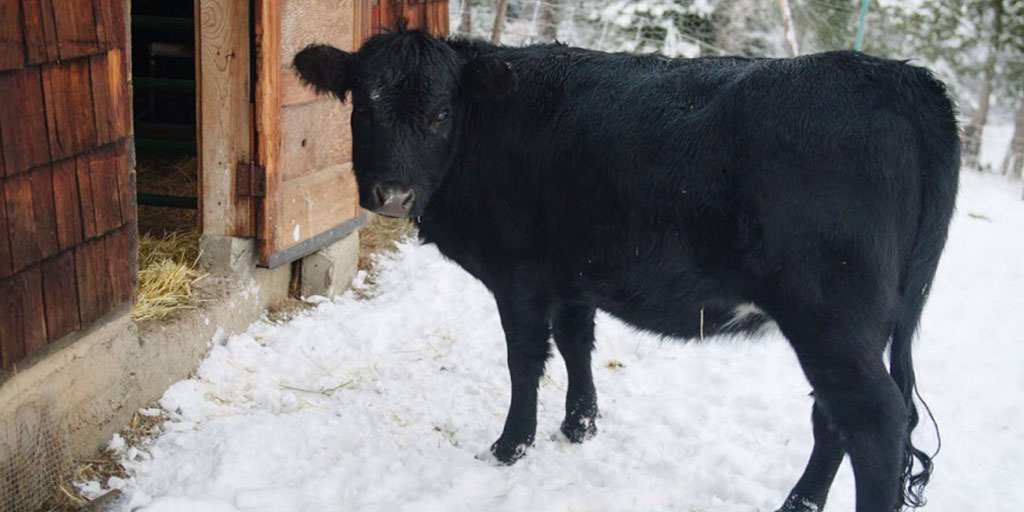 A few weeks ago we had a very eventful couple of days when the dogs continually took off to explore as we began moving them from their Winter paddock to the temporary fencing paddocks. On the first day, Lulu took off right after them. You see, Lulu believes she is a dog. She and our three Maremma sheepdogs are inseparable and if they are separated, she bellows until they come back…even if it’s all night long.

On one of the days of the dogs ‘exploring’, Ernst stayed back with me.

So three white fluffy dogs and a black pregnant cow take off running through the forest. Surprisingly Lulu is able to keep up with them, she’s a fast runner. We tracked them for a bit and then lost sight. So by quad, foot and car, we went looking for them. We received a couple phone calls from neighbors, “We just saw Lulu and the dogs running up the far road”. A hilarious sight I’m sure, but stressful nonetheless.

A couple hours later we spotted Ernst and Fritz in a large pasture a couple miles down the road. A wonderful neighbor of ours took David out on his ATV to go get them. As we neared, we saw Bertie with Lulu in a separate pasture, Lulu was too big to get through the fence and so Bertie stayed with her. I was so proud of Bertie, a redeeming situation being that she is generally the big trouble maker. David ran all the way home with Ernst and Fritz and then came back to help me with Lulu and Bertie. They had all probably ran 5-8 miles and Lulu looked beat. As I put her halter on and began leading her on the long walk home, she would stop anytime Bertie wandered off, waiting for her to return before resuming her walk. David drove our car and chauffeured us home…slowly but surely. As we drove/walked, we began singing the song “Best of Friends” from Fox and the Hound.

You’re breaking all the rules
They can’t understand
Your magic wonderland, hu-hu-hu 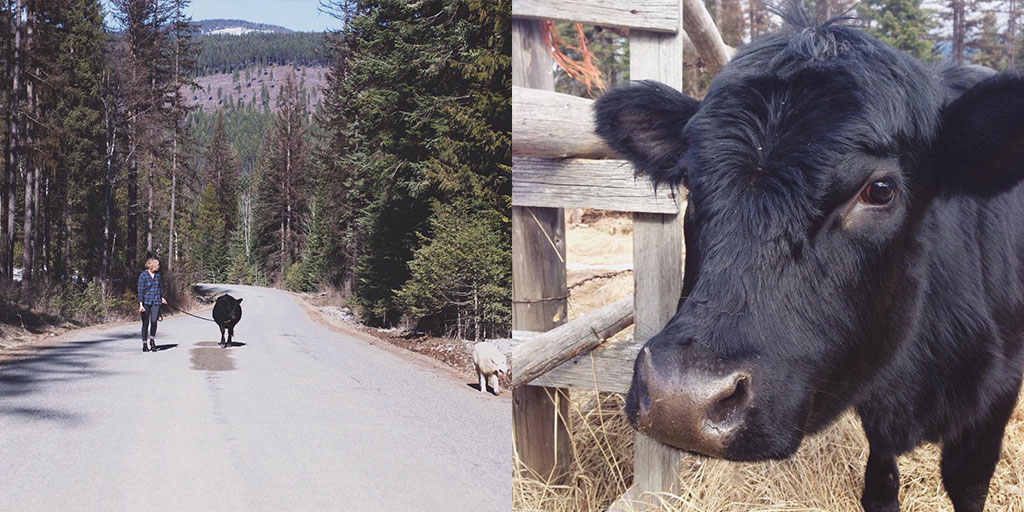 We were relieved that the dogs and Lulu were now safe at home, but a couple days later we noticed Lulu had horrible diarrhea and it only continued to get worse. That evening I found Lulu listless and despondent out in the pasture just staring at the fence. In the dark I went out and found her covered in her own feces, it was awful. It took me 30min to get her to walk just 30 yards back to the stable, with her stumbling every few feet. I put her together with the dogs so that they would snuggle and watch over her.

Over the course of the next few hours she became more bloated and her breathing became labored. It was painful to watch and not know what I could do. I spoke with our vet and he thought maybe she had grain overload and said it could very likely kill her and at this point there wasn’t much to do, but wait it out. I also spent some time talking with my friend Mary who is a cattle rancher, a woman I admire very much and shoots it straight. “A Trocar might save her, but a vet should do that and it’s a last resort”.

We don’t feed Lulu grain, but she has snuck some of the dogs food from time to time and with her recent escapade we wondered if somehow she found grain or something else. I spent much of that night out with her in the stable, rubbing her ears with lavender essential oil to help her relax and maybe release some gas, singing hymns to her and asking God to grant us ignorant new farmers some Grace. Lulu is an exceptional cow and the thought of losing her had me in tears more than once. I finally made my way to bed, knowing that whatever was going to happen would happen.

During the night David went and checked on her a couple times and we awoke in the morning to her still alive, but laying down in the stable with her feet sort of to the side because her belly was so large. I wasn’t convinced this was grain overload, but the bloat was obvious. I called the vet and he said he’d come out as soon as he could. About an hour before he showed up, all the sudden she got up and started walking around and while she was still very bloated it seemed to have diminished slightly and some of her energy was back. I honestly couldn’t believe my eyes.

When our vet arrived he spent some time monitoring her and checking her vitals and such. He then proceeded to put on a glove the went clear to his shoulder, lunge into a power stance only a seasoned vet (or rancher) can accomplish and went arm first into Lulu’s backside. Whoa. Thankfully David was there to catch it all on camera. haha.

The vet concluded that between the stress of so much exercise and eating something bad for cows (native poisonous plants and trees or a neighbors moldy hay) it was just the combination to send her into bloat. He was surprised at her recovery and said she’d soon be back to her normal sassy self. And, she was indeed pregnant. 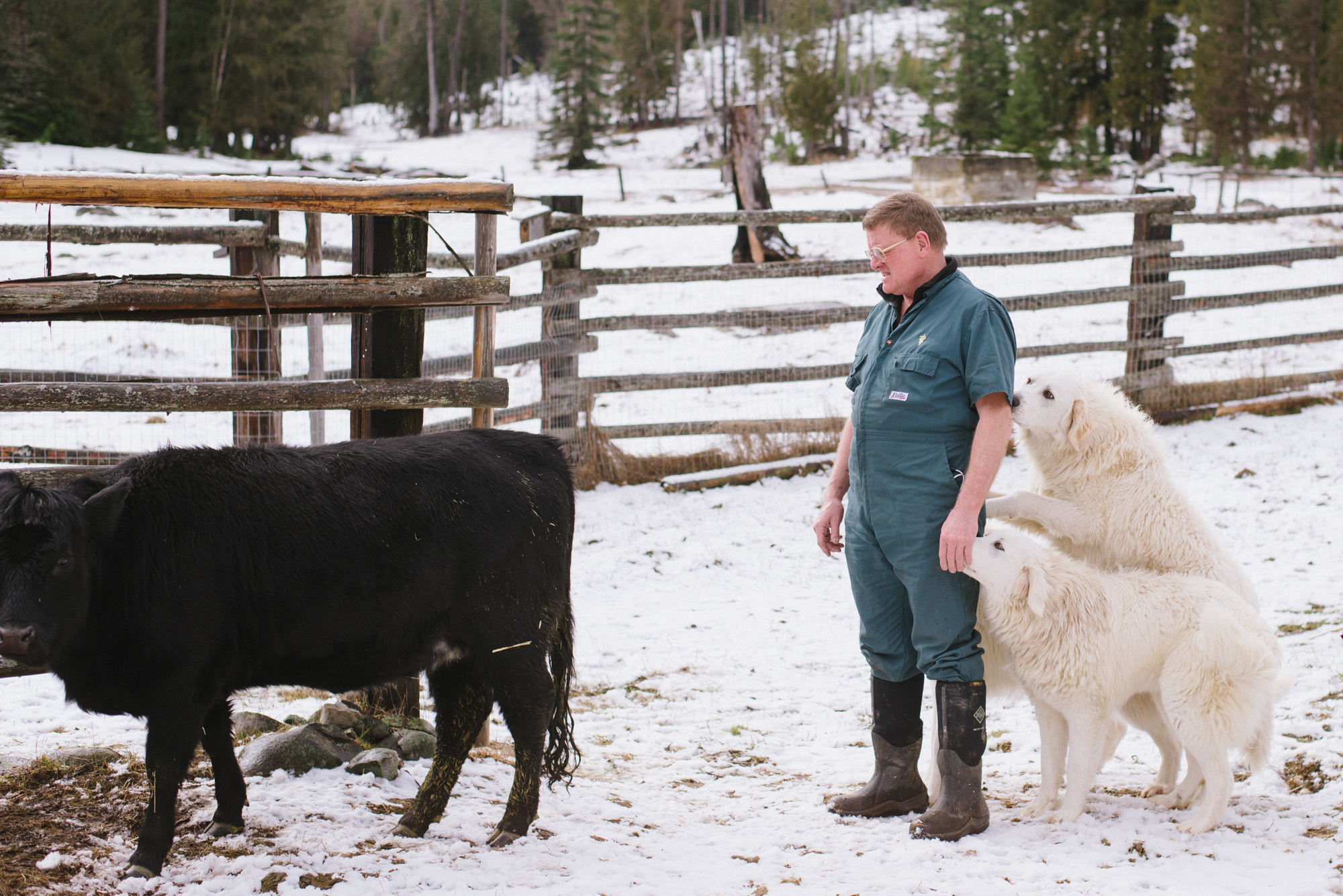 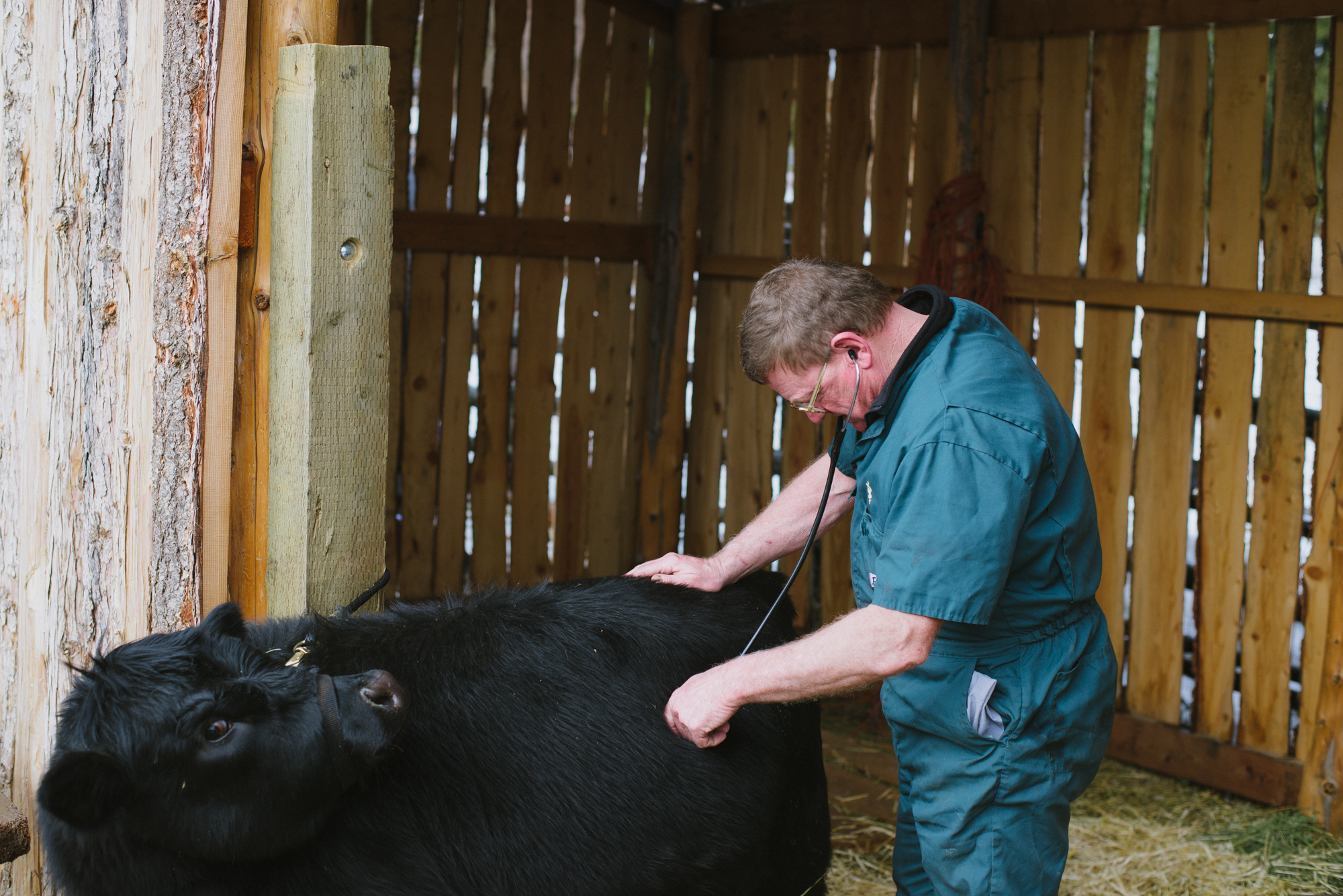 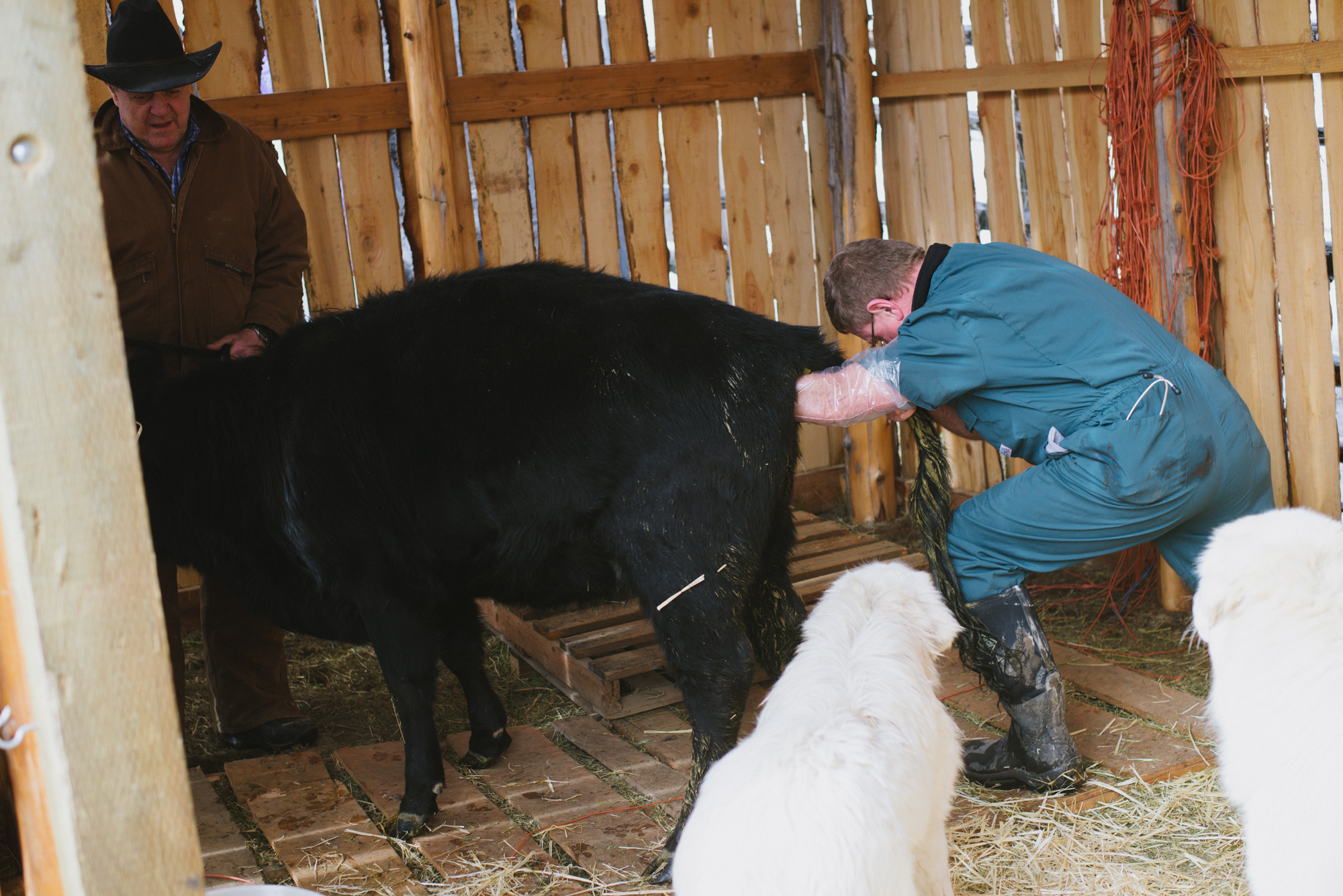 –Always work on your fencing. Good fencing is imperative, adequate is not. And if you think a cow can’t get through it, think again.
–Working dogs are lifesavers, literally. Even if they’re puppies and still learning, their value is incomparable. So thankful we have them. I’m positive they are largely the reason Lulu made it through the night. They all were laying against her, keeping her relaxed and comforted. Think about how you do ‘skin to skin’ with your babies? Same thing…I noticed her breathing became far more regulated when the dogs were next to her.
–Know your neighbors and build relationship with them. You’ll never know when you might need their help and vis versa.
–Keep dog food and any other sort of grain away from your family cow. Many cattle ranchers finish or feed grain, but that’s their deal and they lose cattle from bloat, it’s just the way things are. A family cow is much different. It’s sometimes all you have and the loss is significant in many ways.
–Help your cow relax and keep her company. Whether it’s singing hymns or rock songs, praying or pleading or rubbing their ears with lavender, keeping them company has a huge impact, I strongly believe.
–Find a good vet. One that will be honest with you and knows his stuff and doesn’t hesitate to get his hands dirty. Literally.
–Build your tribe. I strongly believe in the adage that “you are the company you keep” and I think that transcends to knowledge you can obtain from that company as well. Woolful has allowed me to meet some incredible people who are now close friends and so knowledgeable in farming and ranching and there when I need them, without hesitation. This is one of the greatest blessings in life.
–Every situation is different. What looks like something, might not actually be that something. Trust your gut (he he) and do what you can. Everything is a learning experience and had Lulu not made it, that too would be a lesson learned, albeit a far more difficult one. Read books, talk to folks doing what you’re doing and reach out to those more knowledgeable. But at the end of the day, we are ultimately not in control. Shit happens. And so we do what we can and we learn from it.

Lessons in farming: Lost and Found 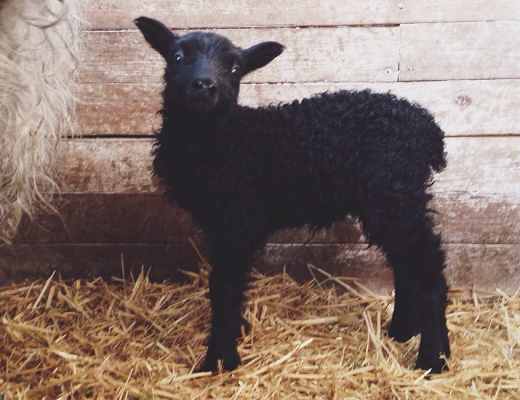 Lessons in farming: A drowned lamb